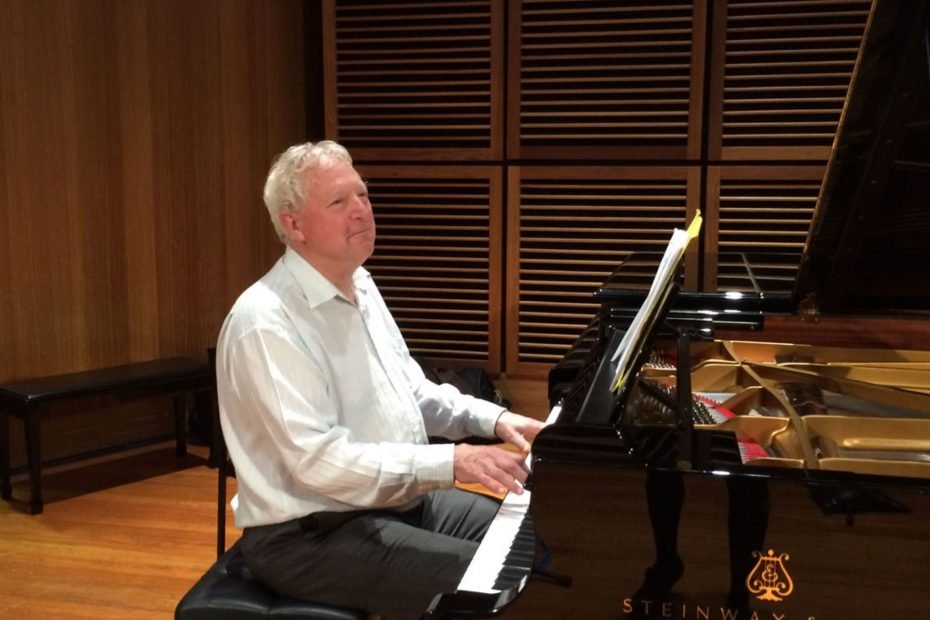 My first encounter with pianist David Miller was from the depths of the bass section of Sydney’s Taverner Consort of Voices in a suburban church hall in the early nineties.

He was attacking a torrid passage when one or two ivories – possibly stuck down specially for the occasion – came flying off the piano’s keys and clattered to the hardwood floor. But he was unfazed, leaning forward, eyes glued to the score, with a half-smile, equal parts concentration and joy. It was as though the disintegration of the piano was half-expected, almost necessary, in order to magnify the thrill.

In more recent years I’ve had many opportunities to glance across the piano at David during a rehearsal or performance. And the face is always the same: concentration, enthusiasm, joy.

Ever since I started singing about three decades ago, David has been something of a mythical figure to me. I’ve sung with many accompanists over the years. Most were taught by him, and virtually all had some connection with him or at least an anecdote about him.

David’s presence is woven into the fabric of the art and practice of ensemble piano in this country. There is no question that, in Sydney at least, much of that cloth is his own handiwork. When he established the Piano Accompaniment program in the early 1980s at Sydney Conservatorium of Music there was no such program in existence anywhere in Australia. It has thrived ever since, and he continues to teach there.

Over the last few years I’ve had the good fortune to work closely with David. I’ve observed an artist who, apart from supreme skill and an extraordinary humility, is passionate about both performance and teaching to the extent that they seem to be fused together in everything he does.

It’s always interesting to explore an artist’s early memories in search of those formative experiences when art first took hold of them. During our two-hour conversation we unearthed many of David’s formative moments, but epiphanies were a bit hard to find. Instead, my overriding impression is that he came to his art through mastery of his craft – the progressive development of technical command. The love for the music was the natural consequence of deep immersion in the playing experience – primarily of the repertoire of the great composers.

David recalls his frequent visits to his grandparents’ home in Bendigo. “The lounge room was very formal. Kids didn’t go in there alone. There was a grand old upright in there, it was very special, it had candlesticks and decorations. There was something magical about it, something revered, which must have had an effect on me. My grandma was a pianist, and she played a lot. And my dad and my aunt used to sing, so there was always music in the family.”

(I am reminded of Booker T. Jones’ first meeting with a Hammond organ as a child!)

David’s first teachers were a couple of maiden sisters in Melbourne. “That was a mistake,” he explains. “They weren’t inspiring, they didn’t enjoy teaching, it was just a job. The house always smelled of boiled cabbage. I actually stopped lessons. There was a risk I’d give it up completely.”

But then his family moved to Traralgon (a small town in Gippsland, Victoria) where there was an elderly teacher called Miss Mortimer.

“Music was her life, teaching was her life, and that was it for me. She was just a wonderful person; she was like a second mother. Half the time I was scared of her, the other half I adored her. I can still visualise every scale she taught me. She was the reason I went on with it, why I went into teaching. The love for the music, the generosity, the way she embraced me like family.”

David had a desire to impress her, to rise to her standard.

“There was another teacher in the town – called herself ‘Madame’ something. I’ve since learned to be wary of teachers like that! That was the fork in the road— you look back in horror at what might have been!”

David perceives that the pull towards ensemble playing was a steady undercurrent during his development.

“Most of my teachers were involved in chamber music,” he says. “I did lots of piano duets with my teacher in Toowoomba. I never had a teacher who explicitly directed me towards solo playing. They all enjoyed ensemble music, and they encouraged me to do it.”

I have to admit I’ve always found the term ‘accompanist’ a bit problematic. It implies that the role is secondary or subordinate. It seems David has been working against that misconception for most of his career.

Yes, there are many compositions in which the piano part is servant to the solo line. But when we talk about the role of the pianist in art song and piano-instrumental music as they have developed over the past two centuries the term ‘accompanist’ is hopelessly inadequate.

The course at the Con’ has been called ‘ensemble studies’ and is currently known as ‘collaborative piano.’ It’s a bit of a tongue-twister, but David sees collaboration as a positive idea. He says, “First and foremost we are pianists. We often choose to collaborate, and this is what we are trained to do.”

When David started out, piano accompaniment was seen as the poor cousin of solo piano. In the early days of the accompaniment course at the Con’, piano teachers would offer him ‘reject’ students from the solo stream who were considered unlikely to pass. He did not accept them.

“From the outset it was essential that we establish a standard,” he explains. “Our course is very demanding. It’s a one-hour audition; we have our own criteria. We look for people with the right attitude towards ensemble work.”

A pivotal event for David was when he reached the state finals of the ABC Concerto and Vocal Competition, playing Rachmaninoff’s Piano Concerto No. 2.

“I got out on stage at the Brisbane City Hall. I was absolutely petrified,” he confesses. “I had no recollection of anything that happened. I think I got through on autopilot. I got an ‘honourable mention’ or something. I have the recording at home, but I’ve never listened to it.

“I thought, ‘I never want to have to do this again. This is not where I want to be.’ The trouble is, if I say that was the moment I decided not to pursue the solo direction, it sounds like I was shrinking from the challenge, or that accompaniment was a substitute, a fall-back. In truth, it was part of my turning to my true path.”

It is hard not to sense in these words an undercurrent of apology, of defence. Even David Miller – AM, septuagenarian – feels that, at some level, his actions still need to be justified.

That’s because prejudices still lurk. But why? Maybe it’s society’s preference for soloistic extraversion over team-playing introversion. Or maybe it’s just the want of a word.

The turn towards ensemble piano was sealed when, in 1972, David went to London to study with Paul Hamburger. Exiled at nineteen from his native Vienna at the start of World War II, Hamburger lived and worked in England for the remainder of his life. He had consummate pianistic, ensemble and teaching skills as well as a deep knowledge and love of German art song, or Lieder.

“From the first lesson, I knew this was where I should be,” David explains.

As with Miss Mortimer, Hamburger was awesome and inspiring, there was mutual love and respect, and David strove to rise to the standard demanded of him.

My study with Paul [Hamburger] inspired me to get an accompaniment program going in Australia. And a lot of what we eventually did at the Con’ was based on what he taught me.

Hamburger possessed a deep understanding of romantic Lieder, a form that originated in Vienna. Technological developments in the piano by the first half of the nineteenth century gave dynamic control and a legato, songlike tone which allowed composers from Schubert onwards to bring the instrument into partnership with the voice in articulating the emotional content of the words.

“Immersive study in the Lieder repertoire gives you the basis for understanding all art song. And with Paul that’s what I got.”

And what about creativity? I make the observation that the creative act of performance is fundamentally different from that of composition.

“That’s true,” David concedes. “But we are doing more than just reproducing the notes that the composer set down. We attempt to reach the source of those notes, the inspiration behind them. We put a great deal of ourselves into that process. Each performance is unique, and human.”

You might say that the performing artist goes in search of the soul of the composer, and what comes out in performance is the individual’s own synthesis of what that soul might look like.

We tend to lament the inadequacy of the musical score as representation of the composer’s intent; but there’s an ironic beauty in its insistence that the performer brings their own creativity to it. Never is a performance identical to the composer’s dream; always it is a rebirth of sorts. Seen in this light, compositions will always evolve. Despite the insistence of some that a particular interpretation is definitive, ossification cannot happen because the piece is reborn at the very next performance.

David invokes the song Wie Melodien (a setting by Brahms of the poem by Klaus Groth) which captures the process of poetic creation.

He paraphrases: “Like melodies, there are feelings wafting around – the poet’s inspiration – which he takes and puts down on paper. But the words seize it and bring it before the eye, and it virtually disappears. In the third verse, the artist takes it off the page and bring that feeling back to life ‘with a moist eye.’”

I didn’t fail to notice David’s eyes actually moistening as he spoke!

There are moments when you feel you are really creating something on the spot. That’s what it’s about. In that moment you connect with an audience, and you are the conduit through which that inspiration comes, you are the voice of the composer.