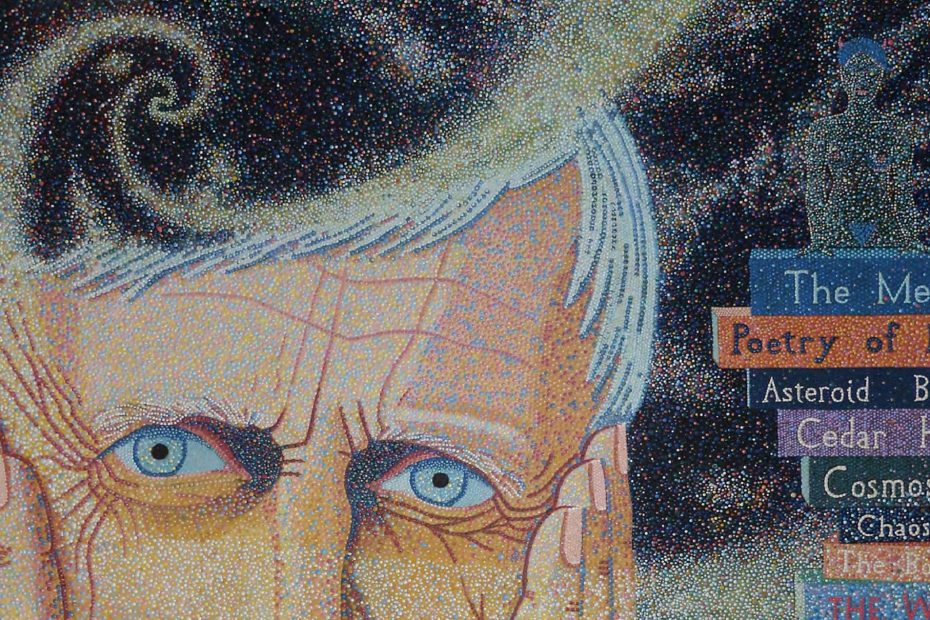 It seems a little hard to believe that I recently spent two hours with Edwin Wilson, septuagenarian painter and poet, talking at length about his life and art, wholly unaware that he carried with him a terminal cancer diagnosis.

He didn’t bring it up. He did mention ‘health issues’ in passing, but for whatever reason I chose not to quiz him.

I came away from our conversation with the overriding impression of an elderly man of the highest intelligence, wit, generosity and artistic sensibility, comfortable in his own skin, satisfied with his life’s work both professional and creative, largely reconciled to the difficulties of his upbringing and the setbacks of his career, yet still compulsively plumbing the depths for new poetic expression, his dialogue with the universe ever unfinished.

Edwin Wilson writes a lot about his ideas and his art. His website is a trove. I’m not sure my little contribution will add much of substance. But he does have things to say on the matter of death.

The two great impulses for art… are the ‘vital sparks’ between the great polarities of sex and death. Sex and desire are the ‘species force’. Counterpoised to [it] is the crushing truth of one’s own mortality, that some choose to distort through the ‘wishful thinking’ of religion, others sublimate through politics, or drugs, or sport, or sensuality, or art.

Edwin seems able to look mortality in the face and recognise it as mere fact. He is also understandably satisfied with his life’s work and the life he has led. Putting the two together – is this the formula for being at peace with oneself?

I don’t really have an answer. There’s still a fire in his belly. You can hear the undercurrents when he talks about the arts establishment and his difficulties in being accepted by it. He has now been inducted as a fellow of the Royal Art Society; recognition is still important to him.

Inside the sheltered cloisters of
the palm and leech, spider and creeper;
this quiet arena, dripping with creation,
plays out the last fugue of shade and light.

After the blade a fern withers in
day’s arc – growth strangles its host
as a young fig, and a liane weaves
a spiral whorl of love towards the sun.

Edwin is an obsessive – ‘a mono-bloody-maniac’, in his own words. He believes obsessiveness is an essential ingredient of an artist.

His obsessiveness springs from two primary sources. The first of these is a damaged upbringing: his father suicided before Edwin was born, and his mother never recovered from the trauma of that event.

My recent conversation with Mary May Simpson resonates with Edwin. “She and I are both wounded souls,” he explains. “She found religion. I found science and nature. That gave me a sense of who I was in the world.”

Trauma makes you grow up quickly. You see the rawness of the world. You can see the world at its best and its worst. You are a ‘watcher’ – you are observing society in a detached way.

Which brings me to the second source of his obsessiveness: being on the autism spectrum. Asperger syndrome didn’t really enter popular consciousness until the 1980s. So not until mid-life did he self-diagnose as ‘high-functioning Asperger’s’. He has an incredible capacity to focus. This would explain his huge artistic output despite working a day job all his life!

Asperger’s is characterised by different ways of thinking and seeing, and commonly, very high intelligence. Detached observation is a powerful facility – and perhaps what artists strive for when they are searching for the truths hidden (by the thinnest of veils) within the phenomena of life.

There is a transcendental aspect to the abstract watcher that is known in many spiritual doctrines. The practice of watching in this way stills the thinking mind, allowing the vastly more powerful intuitive mind to come into play.

Not surprisingly, Edwin often talks about intuition. And he says there is a side of him ‘that can conceptualise the whole of [an artwork] in its totality as a composition’. He also talks about poems or paintings that come to him in an intuitive flash. The extraordinary pointillist painting, Bombs Away, he ‘saw as a word picture’.

(Isn’t ‘word picture’ a fascinating expression? It feels initially like a contradiction. But it points to the nexus between words and images; in other words, to the dawn of human consciousness. And it’s a place where the painter-poet is at home, I expect.)

The array of facilities we’ve described – intelligence, focus, obsessiveness, intuition, detached observation, spontaneous synthesis – is a killer combination for a creative artist. It explains a great deal about the quality and quantity of Edwin Wilson’s artistic output over a lifetime.

In the early seventies, Edwin put a great deal of effort into Perception and Magnitude, a large-scale work that he describes as his ‘theory of everything’ painting, including ‘life, love, the universe and the kitchen sink’. He’s always striven to make sense of life, but let’s face it, life is complex. It’s a big ask to try and encapsulate the universe in a single work.

The early sketch above has strong similarities with the work of Brett Whiteley. Edwin happened to meet Whiteley and view his studio at around this time. He was overwhelmed by the spontaneous (and drug-supercharged) genius of the man.

I staggered into the sunlight, chastened by this brush with genius. How could I compete with that as a Sunday painter? So I hung up my brush again for almost 30 years, to focus on my pen.

I think he asked himself the wrong question: it’s not about competition. We’ve all had humbling experiences in the presence of genius. We should be careful not to make such comparisons in the first place. Edwin is Edwin. Obviously the two artists were exploring similar subject matter, but their styles and work rate were completely different. My answer to Edwin’s rhetorical question would be that he did compete. It just took a bit longer!

Take a look at Tree of Life, painted in 2013: he has pared back the themes but it is still dazzlingly complex; it’s not an imitation Whiteley but a mature Wilson.

And it’s not as though the pen wasted its 30 years while the brush was resting. I am not a student of poetry, but from my reading of his work I am kind of surprised Edwin Wilson is not a household name. Recognition and success never really came his way. Most of his poetry, novels and other books have been self-published with Woodbine Press. Most of it is there on his website. I think it’s fair to let his work speak for itself.

Rivers of ice and fire
have scoured the earth’s face,
that restless season of our dust,
a peppered sunbeam in a church.

After the pick and spade
dear child, the wilderness—
you will gnarl unshaded
for all the talk of Jesus.

Abandoned to a wild infusion
of petunias, my little Taungs;
home with your wandering muse
and illiterate Y chromosome.

Time will ersase your memory
without enmity or scar,
without so much as bending
a light beam from a star.

Edwin Wilson is represented by Artarmon Galleries in Sydney.